When I published my Six-time Best-Seller, Building A Magnetic Culture back in 2011, the statistical breakdown of Employee Engagement was as follows: 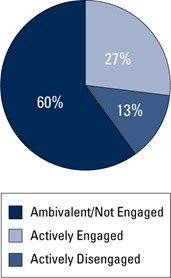 The statistics have not changed much since then, with the middle category of Not Engaged/Not Disengaged remaining the largest of the three categories.  When people see the size of that middle category, they tend to be surprised.  After working as a Management Consultant in the field of Employee Engagement for over 35 years, I discovered that one of the main reasons so many workers are not engaged is that they are simply in the wrong job.   I feel sad that millions of people do a job that they are not fervently excited about.

I have not.  In fact, when the Covid-19 Pandemic extinguished many of my live keynote speaking engagements, I had to pivot.  Having grown up in Northern Wisconsin, I was raised listening to country music.  Thus, when I first heard the songs “I’d like to check you for ticks” and “Tequila makes her clothes fall off,” my immediate reaction was “I could have written that song.”

Hence, when I became an author and writer, it was a natural consideration that I would become a writer of the lyrics for country music.  I am proud to say that I have written six country music songs and am currently looking for a music agent and/or musician eager to take any one of these songs to the top of the music charts!