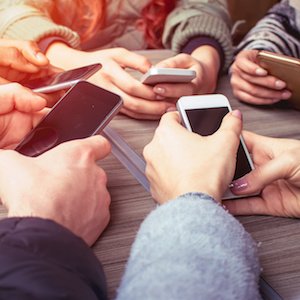 We’ve all seen it or experienced it firsthand: Someone is speaking at a meeting or presenting at a conference, while half the audience members are looking down, openly fiddling with their smartphones.  As a keynote presenter myself, I find this audience behavior especially frustrating.  I’m up there passionately speaking about ways to truly help people improve their day-to-day experience at work, and the messaging is lost on an audience that is simply not listening or being fully present.  Even when event planners ask participants to silence and put away their cell phones, people can’t seem to part with their phones for an hour.

Yes, we have become a society enslaved to our technology.  Instead of looking at other people, we stare into the black mirror.  This addiction causes people to put their lives at risk, especially when they can’t look away from their phones while driving or walking across an intersection.

Many managers are torn about whether they should try to limit personal smartphone use in the workplace, and how they would go about enforcing it.  Some managers are even considering the more draconian step of banning smartphones altogether.  On one hand, smartphones allow people to accomplish work remotely, respond more rapidly to others, stay more up to date on business developments, and keep up with colleagues and customers.  But on the other hand, smartphones may also be the primary productivity killers in the workplace.  According to CareerBuilder research, 1 in 5 employers (19 percent) think workers are productive less than five hours a day.  When looking for a culprit, more than half of employers (55 percent) say that workers’ mobile phones/texting are to blame. 1

Consider the statistic of 2,617 times a day.  That is how often the average worker looks at, taps, swipes, pinches, or otherwise uses his or her smartphone.  This stunning amount of times adds up to 2 hours and 25 minutes that could be spent on other things, like work.2

Interestingly, there is also considerable evidence that even the mere presence of cellphones in the workplace decreases productivity.  In a recent study of workers, when their personal phones were simply placed on their desks and left untouched, their cognitive performance was more adversely affected than when the phones were placed in a separate, more remote, location.3 It’s true that smartphones have become a necessity to many, but they’re also turning into a necessary evil.

1. Establish clear policies and specific timeframes for the use of smartphones at work, and make sure people abide by the rules.

2. Consider asking people to leave their phones at their desk or workspace before a meeting starts. Alternatively, make it a standard meeting practice to remind all attendees to shut their phones off, and have them remain off, until the end of the meeting.

3. Establish clear rewards and punitive measures for those who follow or abuse such guidelines. For example, when a cellphone rings, or someone is caught checking a phone during a meeting, make that person stand at the front of the room for the rest of the meeting.  One company I worked with in Michigan had fun with a good-hearted punishment: a boom box was turned on with music, and the guilty party would be required to take the stage and dance the Macarena in front of everyone in the room.

Conversely, organizations should reward good behavior vis-à-vis their workers’ smartphones.  Consider using an app called Moment, which tracks the total amount of time people spend on their phone each day.  This app can be required for use by your entire team, enabling you to track usage for work hours during the work week.  The team member with the lowest usage can be given a prize or trophy at the end of the week, or simply offered “bragging rights” in front of the rest of the team.

4. Emphasize to your Senior Executives that they should lead by example. Given that their visibility and presence with team members is a proven top driver of engagement, these leaders should be reminded to put their phones away during meetings and look their team members in the eye.  Not only will this boost their reports’ engagement, it will set a positive example.

5. While instituting new measures for cellphone use, expect a backlash. For instance, team members will argue that they need their phone for staying in touch with an important customer or a sick child.  In some cases, this will be true.  But it’s not true all day every day.  Even if the workplace bans phones in meetings altogether, team members will deftly find a “workaround,” such as wearing smartwatches, which are just as distracting as smartphones.  Make sure your team understands why being fully present and avoiding electronic distractions is an ongoing goal for everyone.

6. Avoid the temptation to ban social media on company devices or tell employees they can’t check social media at all during the workday. Social media use has burgeoned considerably, with 7 out of 10 Americans utilizing Facebook, Twitter, and Instagram daily.4

That said, most experts agree that restricting access in the workplace is both myopic and a purely bad choice.  While access should be carefully managed by the organization, fully restricting it is an awful idea for the same reason that organizations embrace social media marketing:

Although personal smartphones can be a major distraction in the workplace, it’s important to recognize that some distractions are healthy.  After all, that’s how ping-pong tables and Friday afternoon beer carts gained popularity.  All work and no fun isn’t sustainable in the long term.  So, knowing that job stress and lack of work/life balance is the number one reason people resign5, why not let your workers watch that cutesy kitten video on YouTube or check out the current score of a ballgame?  Healthy and happy employees are more productive, more engaged, and much less likely to resign.  The key, however, is helping employees know where to draw the line with distractions.  Try these six tips and find what works at your organization!