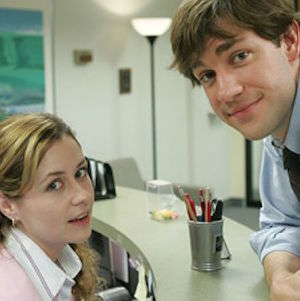 The recent and poignant worldwide conversation on sexual harassment and abuse of power has spawned a more expansive dialogue about whether consensual relationships in the workplace are acceptable.

For years, the modern workplace has proven to be a very reliable matchmaker.  In fact, an estimated 22% of American couples met at work.1  In addition, fully 35% of workers worldwide report having at least one relationship with a coworker in the past, 37% of males, and 34% of females.2 And fully 84% of Millennials are open to dating a coworker.1

Barack and Michelle Obama.  Bill and Melinda Gates.  Angelina Jolie and Brad Pitt.  Gwen Stefani and Blake Shelton.  All of these famous people met their love at work.

Objectively, there are pros and cons of dating someone at work.  On the one hand, considering dating someone at work has the benefit of widening the potential pool of love interests.  On the other hand, many people fear the drama that comes with the post-breakup aftermath, as well as being perceived as “unprofessional.”  With that said, think of Jim and Pam from the television show The Office.  They each found someone special and there was no terrible breakup.  That can happen in real life too.

Some people don’t even want to date their coworker, and simply come up with “work arounds” (pun intended).  Of the 35% of the Match survey respondents who had “dated” a coworker, 65% of them had a one-night stand, and 56% of them had a FWB relationship.  That is “Friends With Benefits,” of course.

As inferred in my opening paragraph here, and largely due to the #MeToo movement, organizations are now reconsidering what “human resources” means to some employees and revisiting their workplace dating policies.  Simply put, the climate has never had more grey area.  Yes, in the past, the lion’s share of organizations had policies prohibiting managers from dating people they manage.  But now these dating policies are burgeoning into whole new areas.  Some organizations are adopting more draconian steps, such as prohibiting any workplace dating whatsoever.  Others are requiring “Love Contracts” to be signed, otherwise known as “Consensual Romance In The Workplace” contracts.  These “Love Contracts” may sound a little awkward to facilitate (or enter into), but they make a lot of sense from a legal perspective.

If your organization is concerned with issues arising from dating in the workplace, you might want to consider making Love Contracts a part of your HR policy.  A typical Love Contract requires both parties to agree to the following terms:

While love may be in the air, as well as what we consistently yearn for, organizations need to better protect themselves and their employees more than ever.  Have you?